My New Zealand Auto Knitter (NZAK) with 80/40, 60/30 and 60/30 compound arrived over a month ago. It's the Mean Green Machine of 2007. We have been becoming acquainted. We have smoothed our differences and I have made socks, BLACK socks! on the 60/30 set up. And they are perfect socks at that! They might look gray because of the flash, but they are inky black just like I've been wanting. The yarn is KnitPicks Essential and knitted up perfectly at nine rounds to the inch. They are soft and comfortable and just the thing for my winter Crocs. Yes, "winter Crocs." They are called Troika. Check them out if you are a Croc fan. I'm taking another look at my sock yarn stash. It is beyond belief! There is enough to knit socks forever and ever amen. I have some great sock yarn from the usual suspects (Lorna's Laces, Regia, Opal, Trekking XXL) and then I have some from some great indie dyers on Etsy and eBay. The sources are wide and varied thanks to the Internet. My latest acquisition is Noro Kureyon Sock Yarn, color number S40. I've read varying reviews about it and have not formed an opinion of my own yet. I've only gazed at it and fondled it so far. Yes, it does feel a bit scratchy, but that's how Kureyon is. The reviews from other CSMers have me hesitating to foul up a machine with it. It seems it's a bear to wind into a cone on the electric cone winder. I might have to save the Kureyon for handknitting.

So the NZAK came. It was packaged to perfection. I worked up a sweat just unpacking it. Then I attempted to put the stand together. I had a heck of a time getting the legs (well, one of them) at the right angle to screw together. Once that was accomplished I attached the machine and started to crank. It was set up with the 60/30 compound and a long cranking of sock yarn coming off it. It purred like a kitten. When I was sure it was working well, I cranked off that waste sock and set the machine up to make my own small sock. That was when the fun began. The fun lasted for a few weeks with many days not having enough hours for me to get an NZAK fix in. Suffice it to say that after far too many tries and failures I switched to the 60/30 regular cylinder and ribber. Some more fun happened as I tried to get my tensions and stitch lengths at a point that made me happy. It finally happened this past week and thus the black socks.

Am I the only one growing tired all the stripety socks? I have loads of colors, handpaints, faux Fair Isle, variegateds and the like. I'm pining for plain socks, solid colors, even striated would be nice. I love the Lorna's Laces almost solids. I've bought many indie dyers' takes on solids and some of the usual suspects' tweeds and ragg looks. Please tell me I'm not the only one tiring of the stripes. However, I still can't resist another jungle, rain forest or whatever Opal comes out with next. And of course I had to have some Kaffe Fassett for Regia.

So far I've made seven socks on the NZAK which actually equal only two pairs. I know the math doesn't add up. With the black sock I made a sock twice before I got the right feel to the fabric. The first two times it was too loosey goosey. The third sock had perfect fabric and the NZAK fairly hummed as I cranked it out. It was such a breeze I was cranking round number 86 in the foot when my brain caught up with what I was doing. The foot needed only 65 rounds. I was supposed to stop and do the toe at 65 rounds! Ripping and rehanging were taking more time than just rewinding and starting all over so that is what I did and produced the two perfect black socks you saw above. Thus it took five socks to make that pair. The mahogany pair made next took only two socks. See, I got better. The color is better in this picture. The NZAK and I have had our differences and will have more in the future I'm sure because one day I will go back to the compound. Right now I am knitting up all the Essential before I switch to another yarn and possibly the 80/40 set up and have to adjust the tensions. I'm loving it right now because it's doing my bidding.

For those of you relatively new to the CSM game I cannot stress enough how much fun this is when everything works according to plan. I also want you to know without a doubt that things might not always work according to plan and there is a learning curve. For some the curve is steeper than for others. There are many varying factors: machine, yarn, even humidity and level floor. Let's not forget operator and expertise with knitting machines. And let's not forget the machines have their idiosyncrasies. As for my NZAK and I, we are fine and making socks in Philadelphia.

"Sock Lady", you're my idol! I've been reading your blog for a while and you are my inspiration. I'm hoping you'll become my sock mentor when I get my machine in mid-February. I've budgeted for a new NZAK, but I'm also considering going with a vintage model. Let me know if you purchased yours directly from NZ or on eBay, etc. Also, do you feel that cost of a new NZ ($1500+) is worth it over a restored vintage at half the price? Thanks for letting me pick your brain. -Vanessa in NJ (aka "beingv" on Blogspot) 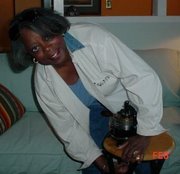 The Sock Lady
I started knitting socks in 2001. I learned using four double pointed needles, went quickly to five, then discovered two circulars, then one. Soon after that I discovered antique circular sock machines and the rest is history. I'm a sock fanatic. I always have at least one pair going on one circular and two or three sock machines set up waiting to be used. My sock yarn stash is enviable to say the least.

The Weather in My Neighborhood